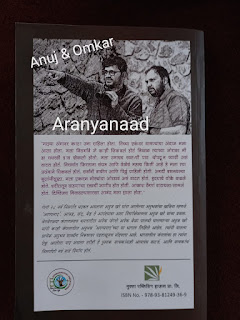 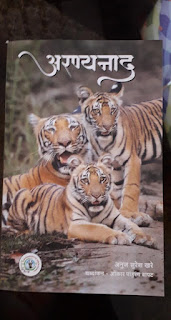 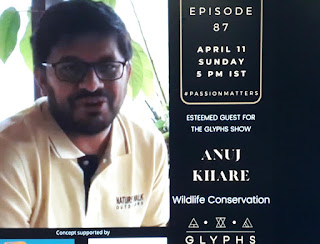 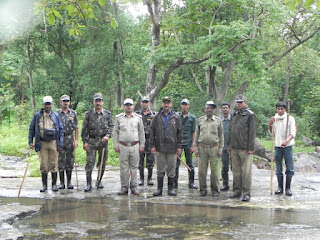 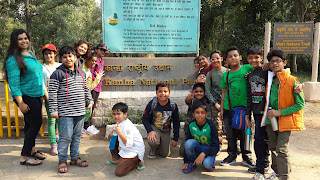 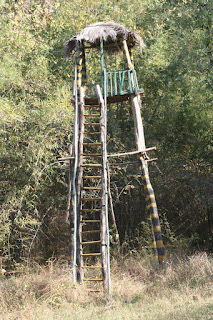 “Success comes to those who dedicate everything to their passion in life. To be successful, it is also very important to be humble and never let fame or money travel to your head”.... A. R. Rahman

Well & who better than Allahrakhha Rahaman, a name which changed the course of Bollywood & Tollywood Cine Industry’s music, making it richer by his creations, can speak about the passion, success & humbleness! And when my topic is about exactly a personality which has got all above three things then I felt relieved to get such words to start this sharing; yes, it’s about one Anuj Khare & his book Aranyanaad. Anuj is passionate about wildlife, he is humble & about being successful, well for people like him if you are trying to count their (his) success in the figures of bank balance or assets or empire they have created then please don’t read the remaining part of this sharing is all I will tell at the start itself!

And speaking about assets Anuj has infinite of it & it’s in the form of people which included guides like Roopchand & RP Omre from the remotest parts of the forest to Mr Pravin Pardeshi & Mr Atul Kirloskar & many such whose names entire country knows, oh yes Ambanis’ too are in that asset list of Anuj! His assets is displayed by the images which he has used, clicked by his freinds which happily shared those for him & the names are like Mohan Thomas, Clement Francis, Vinod Bartakke, Viram Potdar, Rajesh Bedi (It’s his image on the cover  page of the book ), Dhritiman Mukharji who has written preface also for the book & many such (Well, happy that Anuj has used some of my clicks also in the books, let me tell you Anuj, its an honor actually for me to have myslef in above big names)!

And speaking about creating empire, Anuj has entire forest of the Maharashtra & many others all over the country as his empire which no money can buy ever or no army can conquer as its nature we are referring too & you can conquer it only by being part of it which Anuj is very much!  And then he has weapons like hard work & knowledge to conquer this empire of nature along & with all such things fame is bound to be there as if there has been a tag like Super Star in wildlife then Anuj would have been contender of the same for sure & will all this he is humble, living by the words of AR Rahaman!

I am sure with all these things Anuj’s fans would surely agree with me  & Anuj will be very embarrassed as humbleness is a curse to a few as they can’t take their praise even it’s a fact, anyways!Well, Anuj Khare , popularly known as Anuj dada in many wildlife seeking youngsters & just Anuj to many more, is a MBA marketing & a person who has dedicated to wildlife his entire life via his organizations/associations like Nature Walk (what else name he could have) , Jungle Belles & many such fronts on wildlife! Don’t ask how  he makes for living & all that stuff as a lot I can write about Anuj but sometime later as for now it’s about his book! Recently Anuj has written a book named Aranyanaad which is in a way like his mini biography also along with his experiences, observations about his wildlife ventures! Anranyanaad as the name (its Sanskrit) says; Aranya means green and bountiful forest; signifies fertility, abundance, plenitude, generosity, resources, prosperity & Naad is sound created by speaking or music. So, in the nutshell Aranyanaad is music of forests & what better Anuj could have chosen than this name as for him forest is life & its language or music is what he is master at (there is one more version about meaning of this name which I will tell at the end of this sharing, lol)! Well, right from the Author’s words you get to know how simple & reflective Anuj is, as he doesn’t hide anything & he has no regrets for surrendering career of MBA marketing, has no shame that he couldn’t follow the traditional so called success & fame track of Medical Science, like his parents & gave up art which he has mastered i.e. of Tabala playing & end up as a wild lifer! Here, I remember words of Jim Corbett, “there are no regrets or no sorrows in the nature it’s just plain acceptance of the reality” & how perfect Anuj has adopted this philosophy may be that’s why when he speaks about forests, words just flow through him like a spring jumping through the valleys & rifts!

Though Anuj has traveled extensively in most habitats (forests) of the country yet he has chosen few selected forests in Aranyanaad & mainly of Central India or say Deccan Plateau as one this is where he begins his wild life ventures & two Aranyanaad is first book & we will have many more episodes of it for other forests. Biography, experiences or expressing oneself, a man always starts with something which is close to his heart & no wonder Anuj started wilderness journey even in Arnayanaad with Melghat & Kika i.e. Kiran Purnadare, Tatya Saheb ie Vyankatesh Madgulkar (Veteran Marathi writer about nature) & WWF as all these were like his foundations of the empire named wilderness! Btw, my journey also started with forests from Melghat as I am from a place named Khamgaon which is on the Akola-Buldana side border of Melghat & that part is just the same which it was some forty years back! And no wonder Anuj & myself gets along well (even with many differences between us on working style, lol Anuj, that was Pune 30 in my blood from mom’s side) as with Melghat as first love for both of us & forests in totality!

I read every page, every line, every word of Araynanaad & the best part is, it’s like Anuj sitting in front of you & telling these stories as I could see his face overflowing with enthusiasm, excitement & joy when he speaks about forests, “Aaarree dada, you must visit this place, itaka bhari aahe na ,booal kadhi jayacha” types! Sometime I felt it’s an audio book & not the read format & I think that’s how the book should be especially when it’s about nature. Another good aspect is Anuj hasn’t much indulged in figures like numbers of tigers, years, dates, sq kilometres or percentage of forest cover & many such as you can’t describe nature in figures, you just live the way it is! And that’s what Anuj has done in Aranyanaad, he has make the readers live in the forests using his words as instruments the way you create a panting or music, so you not just read the book but listen to it & see it also!  And then the book takes you through not just Melghat but Nagzira, Pench, Dajipur, Koyana backwaters & yes Tadoba too making you relive who has been to these places & making others pack their bags & start for these forests, that’s the power of his sharing!At the start of Pench chapter, Anuj writes, “you must visit this forest & its so close to my heart” & then he writes ahead, “you must be wondering why I write these words about every forest” & then he only explains because every forest is special & different, that’s why; that simple, isnt it!

One more thing, Anuj hasn’t focused on just tigers or leopards (well, his tourists do, as that’s unfortunate part of wildlife tourism) but right from sloth bear to the birds like crested hawk eagle he has tried to make the readers know about every aspect of the forests which makes the wildlife complete! At the same time he has been specific about locations (detailing is very important aspect of wildlife), situation, season & timing of everything he has encountered. And  then Anuj tells us, forest teaches you to sharpen your senses like seeing, hearing, smelling & feeling too as in our city life we has almost stopped using all these things & they do help you in making you a better person in your daily life, even in your concrete jungle!   At the same time Anuj’s humbleness makes him mention names of many people like RP Omre, Roopchand & guides in the forests to Mr Murthy & Mr Alok kumar which are senior officers but all linked with one common thread i.e. wildlife conservation! And yes Anuj is a foodie to so you get to know what’s best local dish available at these forests & where! And Anuj has given justice to the places around the forests along as no forest is made of just trees & tigers, it’s the people, places, stories all of them makes a forest truly alive & that's what Anuj has taught us through his writing!

So, all in all, Aranyanaad is not just another book about forests but it is, “The Forest” by itself of which you can make a safari of sitting in your living room or in car! One name needs applauds for the book & that is Omkar Bapat, who has been Anuj’s bestiee as well he has  really given life to Anuj’s words & that’s not an easy job  as you can’t just cut paste nature, which Anuj is!  Well, “Aranyanaad” I have explained the literature meaning of it earlier but keeping Aranya as forests,“Naad’ in Kolhapuri Marathi means an addiction, so Aranyanaad in other way is making forests your habit, & I think Anuj too will agree to this version more! All the best Anuj, just remain the way you are as forests are our future & you are a living forest, is all I will say!

Posted by sanjay deshpande at 11:15 PM