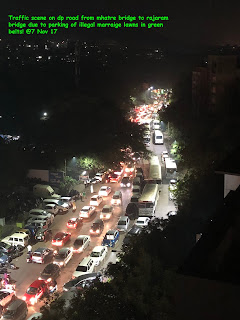 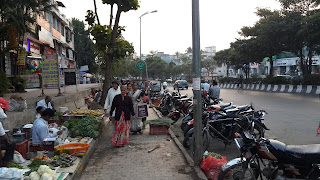 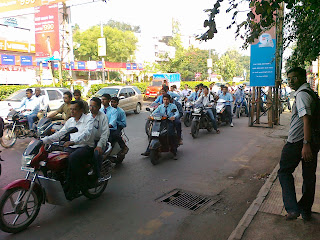 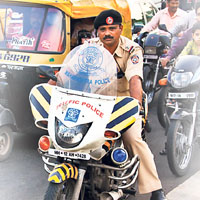 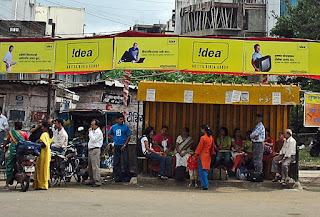 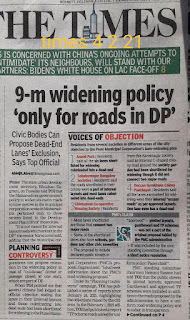 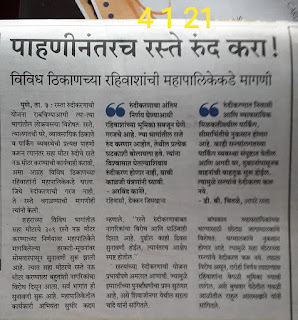 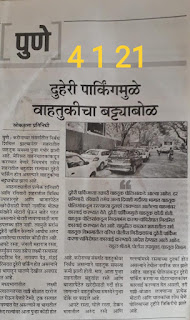 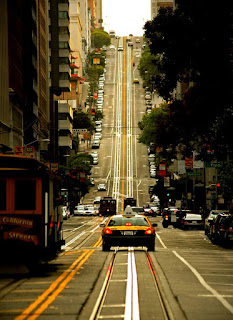 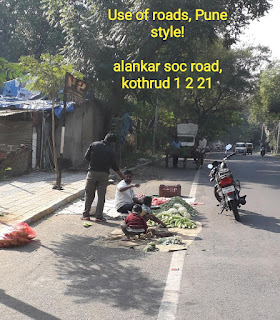 “Cities have the capability of providing something for everybody, only because, and only when, they are created by everybody.”...

“Not TV or illegal drugs but the automobile has been the chief destroyer of American communities.”...

“There is no logic that can be superimposed on the city; people make it, and it is to them, not buildings, that we must fit our plans.”...
... Jane Jacobs.

All above three quotes I used as the subject vs. aptness of each above quote was such that I felt like Hanumanji searching for Sanjeevani Herb ( a life saving medieval herb) on Dronagiri mountain & as got confused which one to get so got entire mountain to Shri Ram! That’s greatness of Jane Jacobs & her thinking ability about urban planning! Not to test your anxiety, this city always amaze me with the controversies it love, the intensity with which each controversy is fought & the consistency of generating (or say invention) the controversies we create! Oh yes, I m referring to our Smart Pune city & the latest entrant in the controversies league is our narrow roads & their widths & their widening! Now, one will ask, how this can be subject of controversy as there are roads in every city, town & country & they keep on widening (though in our country, roads keep on narrowing also) also, so what so big deal in it! Well, first this is Pune, where everything is a big deal especially when it’s related to the city or people & second it’s not about road widening but it’s about our attitude regarding such civic issues, that’s what makes even the issue like road widening as big deal. And then while the Smart City campaign was in full swing (anybody remembers it?) that time majority of Punekar’s has mentioned traffic as the most concerned aspect of this city which is directly related to the road widths & which is again a myth or a sign of our unawareness (ignorance actually) regarding our city & its issues! First, let me put forward, “traffic has nothing to do with the road widths”; I am no great urban planner but I have been to some great cities & seen work of some great names which are respected in urban planning & I am resident of this city for more than thirty years, that has made me dare to make such bold statement!

Problem of our city is not traffic or roads or vehicles, problem of our city is our attitude towards the traffic or say transportation along with a blind eye(nose, ear, brain too) from the “Mai Baap” govt regarding real needs of this city’s residents for their commuting within & out of the city! As there are bigger cities with denser population & smaller roads in the world but the most “kamjor kadi” i.e. weak link with this city is public transport! And if poor public transport is not enough then very poor infrastructure of traffic control systems which we call as traffic police (that’s not right actually), I am not blaming their efforts rather I pity when I see a white shirt cop covered in smog & smoke & yet keeping his or her cool while he or she is dealing with the Punekars’ on roads, which behaves as they are at war (and I don’t blame them also)!. Though I personally feel again its attitude which is reflected in following the traffic norms may it be parking our vehicles or driving or the way we use roads & its outcome of Police dept’s not being able to create enough fear in the minds of the commuters & we blame it on roads!  It’s a debatable question that how much is an ideal road width & whether 6 m wide road are really good, well they have been for the years & there has been TDR as well FSI which was equal to that on the wider roads in past, I see no harm being done till now! I am not against or for of widening all 6 meter wide roads to 9 meters, I am just asking few questions to all of us as well trying to analyze the situation or say solution!

First & foremost, how we conclude that giving more FSI or TDR on 6 m wide road fronting buildings will create chaos on roads as well traffic, because are we going to allow residents in these buildings to park their vehicles on the roads adjoining to them & if not then what control we have that these 6 m roads are not having traffic issues even right now also? We need on one side affordable (joke) home in the city centre & we don’t want to choke the roads by the vehicles of these affordable home’s owners, right? Then why are we silent on not building a public transport system which will remove the need of even a 1 bhk (I mean small home) flat buyer to buy a car & two no’s of 2 wheelers for his daily needs of commuting? As well just do mind, urban planning is not about some concrete structures & metal subjects on roads but it’s about people & the people in this country love to flaunt their wealth, of which buying (read as owning) a car, big car is one of the most essential aspect! And whatever laws you make or public transport you build, people will buy cars & two wheelers just the way they spend lavish on the marriages & decoration & fire shows in those marriages!  So, it’s not about the road widths only it’s about how we can make these people refrain from bringing their wealth in the form of cars on the road, first by providing good public transport & second making them respect (read as fear) the traffic laws if at all they bring their cars on the roads & then road size won’t matter much, is what my logic is!

At the same time it’s not just about the vehicles & public transport, it’s about the use of roads & footpaths also, which we all know about. The irony of Pune’s roads (actual any town in this country) is where roads are wider there they are used for all other things than traffic & where they are narrow there is no space for even vehicles, so we are talking about miss-management of the traffic & that’s something nothing has to do with the road width! And the for years we have 6 meter wide roads & 9 meter wide roads & now we have 30 meter wide roads too which also get chocked in the peak hours of traffic so why to give more FSI on these roads too then?  High time to ask some basic questions about the studies we ever have made about the way we use our roads to our  so called planners & the govt, what it want as outcome actually when they widen some roads or allow some TDR on some such widened roads!

Last but not least, what about the trees aligned all along the narrow roads & wider roads which we are again re-widening, they were there since we started making the first roads & now only they can’t move away on their own, we have to cut them away & the new trees will take decades more to again give us the shed & oxygen but till then what about the air we will keep breathing, have we thought of it?  Guys, if we think of only the cars then we will end up only making the roads & flyovers, it’s high time to think about the people & the trees & the birds & may be then we can at least dream of a city where the debate won’t be about 6 meter or 9 meter roads but about good life & bad life; till then keep fighting guys, if that’s what you call as Smartness!

Posted by sanjay deshpande at 6:18 AM