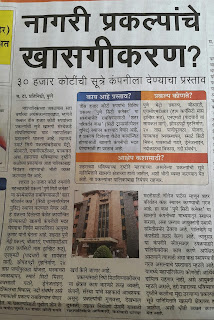 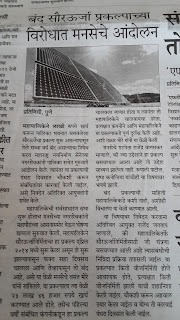 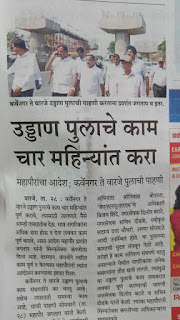 “It’s not about no money, it’s about the attitude to spend it is what decides whether it’s a good government or bad”…
Mr. Arvind Kejriwal.

No need to introduce the Delhi’s common man’s Chief Minister though many may not like his erratic behavior a times but sometimes he does makes sense & in his above quote I do find one! Why I remembered his words is our dear PMC i.e. Pune Municipal Corporation which is our city’s governing civic body always makes me wonder by the headlines it makes in news papers. This is the time when entire city has being painted in Smartness Mission, but the recent news which made to front page about the city was definitely alarming; it said that PMC has been short of funds & many development works budgets will have to be cut down or else there won’t be enough money for even salaries of the staff at the year end! That’s really shocking as on one side we are trying to make Pune as number one city in country & on other hand if we are not able to make proper budget or generate enough funds for various tasks then all the efforts will go in vein. On the very day which carried this news, there was one more news which in both ways was concerning to me i.e. as subject wise as well it was about a road on which I reside. It said the said roads work was abruptly stopped as it has been started without having any budgetary provision as well without taking consideration the residents along the road. Also the road was in perfect shape & no need was there to concrete it, this I will also vouch as I use the same road & it was one of the better roads in city construction wise. Yet some one up in PMC thought that it has to be concretized & started suddenly digging the existing road & now the situation is since last month the road work has been stopped & entire traffic in patches is being operated via half road width causing all sorts of the road blocks as well small accidents too!

And then there is one more head line saying most of the PMC’s work will be outsourced i.e. given to separate company on which PMC i.e. general body i.e. all the elected members won’t have any control, at least the news says so! First two news might have made headlines but they are routine for all of us as well our rulers. Each day the incomplete works as well some or other laps of duty keeps PMC in news but that isn’t taken seriously by our local rulers but this news i.e. PMC going private for major development work surely stirred rather shake them up as this is direct attack on their power! Let’s understand first what is role of PMC & its general body in every single rupee spent which decides fate of this city. Well as we all know PMC Commissioner makes a budget for every year along with his team & this budget includes provision for many infrastructural works like new roads, water treatment plants, drainage treatment plants, distribution & then civic structures such as hospitals, sports facilities & many more. Then there is maintenance as well uplifting of the existing systems including public transport to road maintenance & then there are salaries of the staff which takes major part of the budget. This budget has to be approved by the general body & before that its goes through standing committee i.e. a committee where every party’s representation is there & any spending head as well money allocation for the same this committee decides. And then only the individual department carries out the works under this approved budgetary provision.

Now the problem is if a separate company is formed & all the major projects which are essential for so called smartness of the city are controlled by this company then what will be role of standing committee or even the elected members & here is real tussle. And not only the elected members, the nexus between few of the officers, contractors & the elected members is something the city is so used now that due to this nexus many projects have been incomplete over the years & the budget is overspent & at the same time many unnecessary projects have been undertaken & money is being spent which in a way is waste of public money but who cares! Take example of present rampage road concreting, even the smallest of the lanes where no traffic is there also being concretized & with no quality norms being followed like making proper base. And where there isn’t concreting there every alternate month it’s like Tom & Jerry show where the cat keeps chasing the mice first the road departments comes and makes tarring of the surface & immediately right from drainage to water to storm water departments move in & when they are done then comes Mahanagar Gas Nigam to Optic Fiber companies & dug the road; again the road department redo it & the game is on!
If this is condition of simple routine maintenance works then one can imagine the major infra projects situation in the city! The flyovers at Swargate & at Sanchheti hospital, even god has given up about their completion target & the projects which are complete like the Y over bridge at Magarpatta or Z bridge on river at Deccan, even the creators acknowledges its faulty design & problem the structures are creating in traffic than solving it!

I think some two years back hype was created about biggest tender floating elevated road from Kharadi to Warje & was supposed to go from river bed or along the river bed something like that; what’s its present status, no one is saying a word about it! Same is about HCMTR i.e. high capacity mass transport route, which is part of development plan since 1987 but yet to see the day light! Then the infamous BRT & each month new announcement for its operating, the joke is in a recent advertise I saw in a cinema hall, they are still showing animated film about BRT & appealing citizens to use BRT but why can’t they show what’s actual scene of BRTS function? Simple if they show actual BRT especially at Satara road or Hadapasar road as then it will expose the failure of the project itself. Agreed at some routes BRT is successful but in comparison to total city’s demand, success ratio is negligible is a fact! Then comes the Mega Project named Metro, such is its speed that this year’s central govt budget has hardly mere ten crore rupees provision for the same! All those who are shouting on the top of head of having politics in it should answer first what has happened to last year’s budget provision? Till now even the route common man doesn’t knows & if it’s from karve road then what will happen to existing traffic till the Metro gets completed, no one has any answer to such questions; as in the back of mind most of the concerned people seems to know that Metro is never going to happen in this city, so why to bother to answer the questions about it!

Apart from roads & flyovers, the city needs water lines as the supply is limited & population ever soaring & then treating the used water i.e. drainage treatment plants as well drainage linens works. Also remember when you have last seen a new public play ground or sports facility or cultural facility being built? OK, leave that & ask about the public health scene for the poor & middle class! Education not just primary but higher is another concern with bad condition of schools & very less numbers of colleges. Ask what is happening to city greening as well the biodiversity parks reservations as they are our only hope to reduce heat island effect, courtesy tons of gasses emitted from millions of vehicles exhausts! I walk most of the time from my residence in patwardhan baug to FC road, Vaishali & in the stretch of some five odd kilometers there aren’t even ten big trees all along karve road & at Deccan, no wonder the summers are getting hotter every passing year!

A smart city is not just good traffic management but it’s where all such aspects of life’s daily needs too are taken care! Here one will wonder where the real estate is concerned with above issues, well if all such points are taken care, in & around the city then only affordable home’s dream is going to be possible. As affordable housing doesn’t mean just low initial costs but lesser day to day expenses also & this won’t be possible without PMC’s infrastructure in proper place. Here is where the privatization of all the major infrastructure works is a must as all those who cry foul over losing the control on infrastructure works, to all of them  I will ask a question, who has stopped the existing set up from completing all above needs of the city & its resident for last so many years? Take example of Nagpur where major infra works are being carried out under control of NIT i.e. Nagpur Improvement Trust or even Mumbai where works like Metro or Sea Link Bridge are being undertaken by MMRDA i.e. Mumbai Metropolitan Regional Development Authority & in both cases the local Municipal Corporation is not involved in any way yet nothing has gone wrong there!

With due respect to intentions of all those who are opposing to sublet all major infra works towards the private company, lets understand that the common citizen doesn’t care who controls what! Already he is stressed enough with problems of traffic to water, so all he expects is a decent surrounding & committed approach of the rulers towards the same. I think this much the residents of the city deserves in lieu of the property tax they pays to our beloved PMC!

www.sanjeevanideve.com
Posted by sanjay deshpande at 7:24 AM