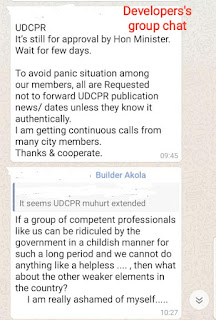 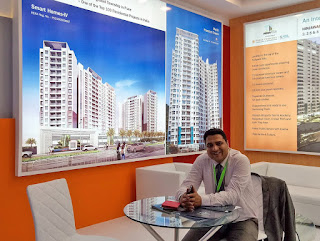 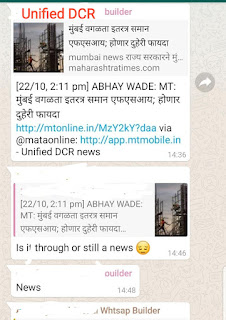 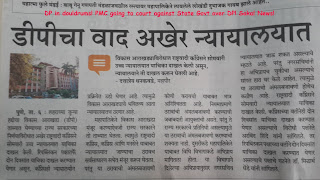 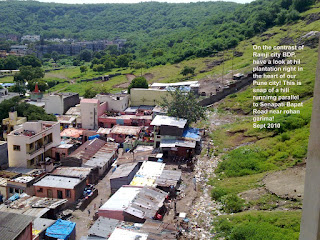 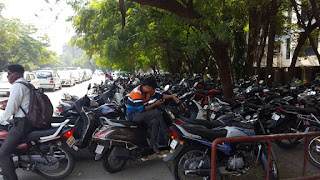 “If voting made any difference they wouldn't let us do it.”...Mark Twain

Few names in the history of writers has carved themselves in such a way that they have become immortal by their words of wisdom & no need to introduce one such i.e. Mark Twain's. He was not only famous for just humour but the wittiness & sarcasm loaded with it! No wonder when my sharing is about our “Mai Baap Govt” & the way it works, Mark's above words are best suited for it, though no sarcasm can make our govt any damage ever, such thick skinned it is. If you are wondering why I am so sarcastic (what else one can do) then the subject is Unified DCR i.e. Unified Development Control Rules which in simpler words means same building permission rules for the entire Maharashtra State's real estate but except Mumbai! Now, why not Mumbai, isn't it part of our State, is it a plan to cut off Mumbai for rest of the State such suspicious question may be raised! Well, that’s different topic & will discuss about it sometime next. But for now, let’s focus on Unified DCR which now for last few years (three or four years  may be, does it makes any difference) is talk of the town or say talk of the towns, cities & Metros too!  Agreed it’s not something like Income Tax or GST type thing which will affect all segments of the society but yes it does affect real estate that means homes & that directly or indirectly means major spectrum of the society which as usual is ignorant about it. But why to blame the society (read as common man) even the real estate players who thinks they knows a law or a policy before it comes in existence are also clueless about this Unified DCR which I will nickname as UDCR for writing purpose.

Well, how that is going to affect masses we will see later or say is affecting already, till then lets understand the role of DCR i.e. development control rules in real estate of any city or town so you will understand UDCR in a better way. For any local civic body which for Pune is PMC i.e. Pune Municipal Corporation, is an individual autonomous body supposedly responsible for the planning or development of the city i.e. Pune for us. It’s this civic body makes a complete plan of the city for say ten or twenty years ahead which is called as DP i.e. development plan of the city or the town. But then you can’t control development or say manage development which we call urbanization with just a plan or set of plans but you need some controlling rules such as what kind of FSI (buildable)  area you will allow or height of the buildings or margins of the buildings as well density of the tenements & many such. All such set of rules which makes the DP possible to execute (is it really?) are called DCR i.e. development control rules & all individual civic bodies has their own set of such DCR or supposedly has to make one.

Now you will understand the complexity of the job as well diversity involved as well discretionary powers to change or say alter such DCR of individual civic body. And then it’s not just the civic body to decide such DCR at their will or wish but after getting sanctioned or freeze at their end they have to send their DP & DCR to the UD i.e. urban development department i.e. The Mai Baap Govt which after using its skill, expertise & knowledge (and power) gives approval to such DP & DCR & then the individual civic body (read as city) is allowed to execute or apply the DP & DCR to the respective city! Sorry, I know its most boring to read & many fellow developers or professionals must be knowing this already but then not the masses, for whom my sharing is; that's why I explained in detail DP & DCR thing. Now, one will ask when all this was in place what was use of UDCR for the State? Yes, for years the cities, towns & municipal corporations were & are making their DP & DCR but the process uses to take too long time (we have witnessed it) to such extent that till the ten year planning been done by then the decade used to be already gone & the city starts facing newer development challenges! And why Pune even the Mumbai, the financial capitol of the country has witnessed it & outcome is urban mess we are seeing all around & the present epidemic has exposed our failure on urban planning front making illegal settlements & slums as hub for spread of the epidemic & both these entities are result of we failing repeatedly on DP & implementation of the same via DCR!

This is why since long the planners, thinkers & visionaries of the State (lol) started thinking if so much time is being spent for individual town or city or region or districts then why not once for all make a common DP & DCR for entire State. Well, common DP for all the State indeed was bit herculean task is what they realized (fortunately) & so it’s been agreed that there has to be same set of DCR for entire State except Mumbai (as I mentioned earlier) & a marathon research was done as to apply same building control rules for Pune, Gadchiroli, Aurangabad, Latur, Wardha, Washim, Nadurbar or Kolhapur or Khamgaon is really hard. By the way all above names are of cities in our State only & Khamgaon happens to be my home town in Vidrabha region!

Real challenge was, to understand the growth pattern of every individual region as well city in the State & its needs (at least I think so, it’s been thought) & then frame the rules. Obviously there was huge oppose as well welcoming approach also. Cities like Pune or Thane which already has some well studied DCR were in place wasn’t going to get disturbed much (we assumed it) but many districts as well town level cities were ruled by the local political entities & as the civic body can define or say decide their DCR, they used to do it for their advantage than the cities! For e.g. some twenty years back when in Pune we used to have just five storied building Jalgaon has got seventeen storied building build because Jalgaon Nagar Parishad allowed that height!  Many people will say what’s wrong in it; well nothing wrong, but without any fire fighting system in place or technical knowhow such buildings can be future disaster spots by any mishap, is equally true! And then does some small town needs such single sky scrapper, is the question I will ask & this was happening on many fronts resulting haphazard growth of the cities all around!

So finally UDCR was made & has put for suggestion objection for real estater’s associations as well architects & the local civic bodies & yes how we can forget the elected members i.e. our leaders (rulers) of local civic bodies across the State! And here is where the problem started as with UDCR in place the local so called bosses has left with little work for their discretion; a bitter truth which our system is never going to accept at the same time will never going to acknowledge also & that’s why since last three or more years (what difference it makes) we all are just listening or hearing or reading or seeing whatsoever that UDCR will come in ruling & yet it hasn’t! And agreed Pune has got many building permission rules in place with own DCR but right from the joke of Metro FSI ( I doubt even god knows whether it will come even after Metro starts running) to paid FSI vs. TDR to giving TDR on 6 meter wide roads to river side green belt widths to hill top hill slopes & oh yes merging of villages in PMC etc etc; so many issues are just lingering under the name of UDCR & yet development keep happening just like a crippled child keeps growing which actually is ageing!

I am no expert but the real estate is a very local market across the globe & I doubt whether the developed countries also has got this UDCR thing with them as even the countries in Europe which are smaller than our State has different rules for different cities, so why to have UDCR in first place is I want to ask. Because a small town in rural of State may not be needing any height or TDR type thing, today problems are employment, education, public health, transportation & ways to communication & every city & town deserves their share of above things. These all must be having different challenges depending up on geographic location, financial limitations & growth pattern type aspects of the development & how all the cities or regions can be weighed on same scale on these fronts, is also I want to ask to our rulers; as on same reasons you kept “Aamchi Mumbai” out of UDCR’s purview so other regions & cities (read as their rulers) are bound to object UDCR on this basis! And then if you are hell bend on getting UDCR then why delay it for years making the masses & not just some bunch of idiots (real estaters’ who else) wait for UDCR, the same way Maa i.e. Rakhi used to wait in  Karan Arjun (well it’s a super hit bollywood movie) uttering only words, “mere Karan Arjun aayenge”! Well, that was a movie & it gets over in maximum three hours but here we are playing with future of not just some city or region or State but future of our coming generations, mind it friends or else UDCR may come or may not but nothing will be left for the development but Urban Mess which we only would have created by then!

Posted by sanjay deshpande at 5:39 AM