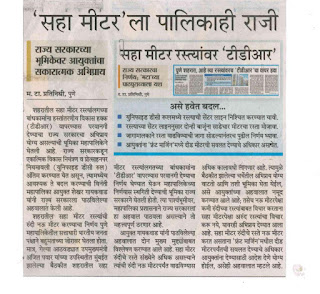 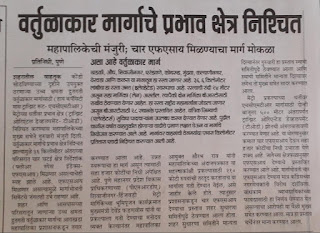 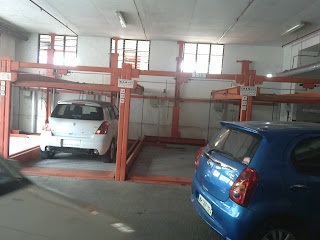 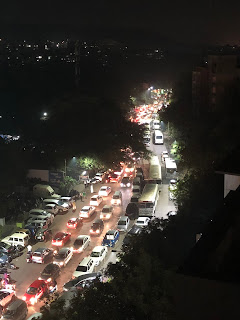 
“You never change things by fighting the existing reality.
To change something, build a new model that makes the existing model obsolete.”... Buckminster Fuller

Richard Buckminster Fuller was an American architect, systems theorist, author, designer, inventor, and futurist. Fuller published more than 30 books, coining or popularizing terms such as "Spaceship Earth", "Dymaxion", ephemeralization, synergetic, and "tensegrity". He also developed numerous inventions, mainly architectural designs, and popularized the widely known geodesic dome.  No wonder with these type of brains full of creativity & ideas USA has progressed miles ahead of us as it’s not about just having brains its making them execute what they think is what differentiates our countries. Years after years we keep on listening to announcements of making Mumbai in to Singapore or Pune turn in to Washington (just example) from our rulers but reality is it’s the policies & the mess we make with them has turning up in to something like Donkey+ Monkey, not even one of them, which is of some use, individually! Many won’t like my criticism but one after another our rulers’ keeps on playing the shows of the circus named urban planning caring a hoot about the outcome, even when present epidemic has hit these two cities worst only because of bad planning! I really wonder despite such attitude & execution still Mumbai & Pune are attractions for millions to settle here, mainly three reasons, one is other options are worst than these two (can somebody make analogy of political scene in the country here), second is thanks to the limited edition public servants (PMC, PCMC, PMRDA, Town Planning, Police & others) who keep on doing their bit to maintain the good life style here & third is the  private sector contributing in every field may it be education or service industry or production industry, to fill the gap between what people (read as citizens ) expect & what govt can provide to have a good life here!

Well, now coming to the policies of urban planning, of-course about “Aapale Smart Pune”; the latest controversy (Punekars just can’t live without it) is related to redevelopment & allowing TDR on roads of 6 m widths in the city! Well, first what is this, let me share (what I have understood) so you will know its importance or impact on the city then you can decide your right or wrongs as per your convenience, means on what side of coin you are! I hope you all (most of you) knows what a redevelopment of a society means; if not in simplest word its demolition of existing building (Society) & building a new one at its place with modern facilities like lift, generator backup, ample parking places (well no comments), posh specifications & yes additional space i.e. if you have a 1-bhk flat earlier then you may get a 2-bhk! Now million dollar question is (sorry rupees), why someone would do it! Exactly here the TDR & all related to its policies comes in picture like 6m road or 9 m road! The answer to why someone will be new building & give more space is not because he is some Raja Harischandra (plz don’t ask what it means, its anything but a builder) but he (builder) will get additional area via TDR to build on this same place which he can sell to outsiders & make some money & from the surplus will build the building with new amenities for the existing residents! This is in nut shell redevelopment of a society, husshhh!

Now you must have understood the entire redevelopment thing revolves around the key word of TDR i.e. allowing additional area to build on the existing building’s plot or land & there were , are rules how much & where you can avail this additional FSI which is key to redevelopment! The main condition for availing this TDR on any redevelopment plot was the access road or the road on which the said building (society) is abutting must be wider than 6 m i.e. 20 ft. Well, in Pune there are many such roads (thanks to the vision of earlier town planners) & because of this condition the redevelopment of all such societies was not possible as if no TDR is allowed then as I said there are no more Raja Harishchandras' around. Means, all these old building’s residents (and builders also) were demanding that this condition must be removed & TDR should be allowed on all such roads of 6 m width too. Nothing wrong, as many of these buildings are old, needs heavy maintenance expense & senior citizens has climbing problems even to second or third floor & as usual maintenance & all such problems. But the govt till now was very keen that redevelopment means more residents, more flats, more cars & that means congestion on these narrow roads, so there was a big “No” for allowing TDR on 6 m wide roads!  Fair enough, though I have never understood the logic as first, does it means people already residing in these buildings (on 6 m wide roads) will not be having cars; second, is it allowed to park cars on roads for all other societies which are on roads wider than 6 m & third what about congestion we witness daily on every road which are even on the 30 m i.e. 100 ft wide too! But then you don’t ask such questions to the govt, that’s first rule here, so it’s ok.

Issue is suddenly in recent PMC General Body, means city civic body decided that they will allow TDR on 6 m roads opening doors of hope for many societies & then again our guardian minister intervened & come up something different but saying it will be allowed. PMC was saying they will give permissions provided the said society which comes for development will make road in front of their plot as per 9 m width, don’t ask what happens to the plot earlier or next, eventually all roads will be made 9 m wide is one more announcement! But the guardian minister is saying this will be done case to case & PMC boss (read as Commissioner) will have rights for giving relaxation to this widening or front margin. By the way as per urban development dept (Super Boss in Mantralay) not even Commissioner has authority to give relaxation to any reduction in front margin of any building & then we have Urban Development Minister who is not our Guardian Minister! Well, I hope you will by now have understood, it’s no more concern of redevelopment or the city or the old society people, it’s now credit game! As well its revenue earning game too as with the epidemic (actually without it also), the city’s revenues are on decline & so as of the govt’s too & govt needs money. So, open up as many ways to earn revenue in every possible form is the hidden mantra in this 6m issue because more new constructions means more money in the form of premiums, stamp duty, development charges & many such. Well, nobody should have any objection for govt earning revenue as out of that only the development works gets completed but while doing so, be clear about the outcome you want, is all common man expects!

No problem, we are used to it, my main question to all the rulers is what we want to make this city, a big slum or a really a city which at least is liveable for our future generations! Because first, who has stopped the rulers (all are included) to make every road 9 m width by forceful acquisition, second do you think by just widening the roads the traffic congestion problem will solve & third what about strengthening the public transport system which will reach to every corner of the city, so nobody will have to buy, drive & park his damn car!  And yes what about the tree cover which we will be destructing under the name of redevelopment & where is the space for planting new tress & make them grow & who are planting them! Yes we need homes within city limits & we need them affordable too but why can’t we make policies which are made by covering all the aspects of life.
For e.g. the Metro work is complete (well, nearly complete as per the authorities) but still we haven’t yet come to conclusion about Metro TDR (TOD/FSI whatever you call it) & especially when it affects majority of the societies’ which are potentially redevelopment clients. At the same time in any redevelopment project which is viable mostly in up market localities (Rate per sq ft above 10k), parking is a major concern & to accommodate the parking you have to surrender many aspects of the planning, trees are just one of them. If govt is so much concerned about the congestion on roads due to cars but at the same time wants redevelopments too boost up, but it’s is not reducing parking norms & not providing alternative to the private cars; well, do I need to tell what will be outcome of any such policy! By the way, why the very govt which didn’t allowed redevelopment (TDR use) on 6 m wide roads till today, think of banning of buying any new cars for all the residents living on such 6 m wide roads in the city! And then the very same govt (read as everyone) names builders for making homes in city limits unviable, but at the same time the greed of the existing society’s flat holders to get just more area for redevelopment & govt’s own confusion about the policies, is mainly responsible for this mess!

Frankly real need of the redevelopment is redevelopment of our (read as society members, govt, and local bodies) attitude towards the entire redevelopment concept; as nobody wants to depart even a smallest of the bite of their piece of the cake & outcome is in the end nobody gets to eat the cake!
--
Sanjay Deshpande
Sanjeevani Dev.

Please do visit my blogs to know about our philosophy at Sanjeevani ! (Click the links below)
https://visonoflife.blogspot.com/2020/05/why-how-should-i-buy-home.html
http://jivnachadrushtikon.blogspot.in/

www.punecorporation.org
Take your issues to Hon PM at link below..
https://secure.mygov.in/

Posted by sanjay deshpande at 1:08 AM